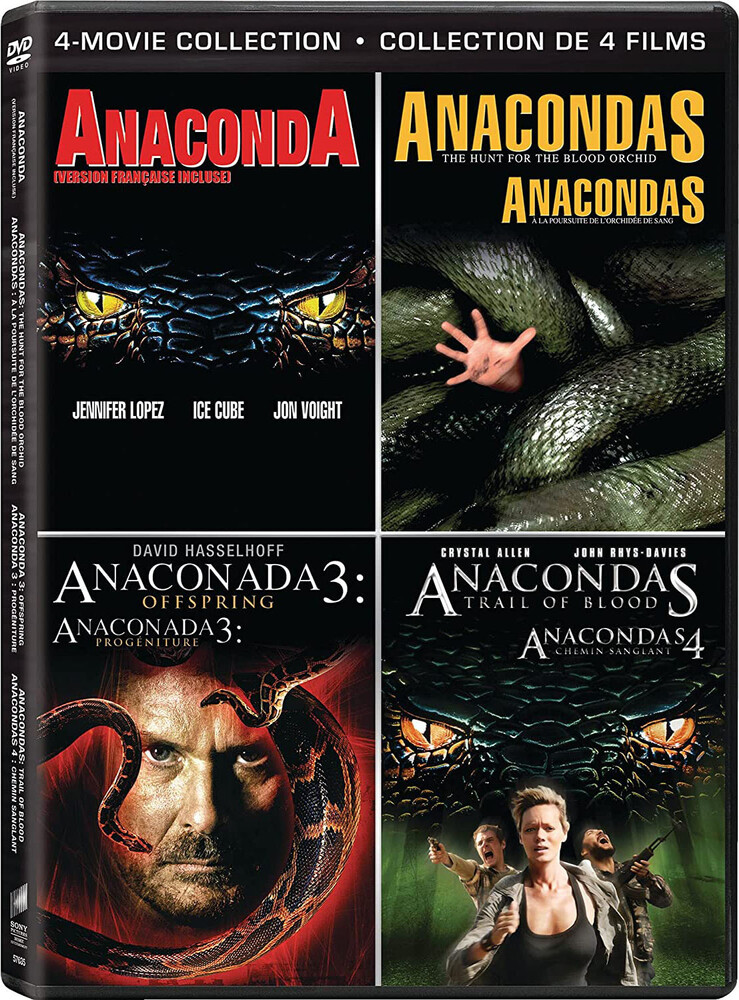 Four-disc set includes: Anaconda (1997)While travelling down the Amazon River, documentary film director Terri Flores (Jennifer Lopez) and her crew pick up grizzled snake hunter Paul Serone (Jon Voight), who claims he can help them find the lost Indian tribe they're looking for. But it's not long before Flores and her people are reluctantly along for the ride on Serone's quest to capture a gigantic, man-eating snake. Ice Cube, Owen Wilson, Kari Wuhrer, and Eric Stoltz co-star in this slitheringly suspenseful action tale. 89 min. C/Rtg: PG-13 Anacondas: The Hunt For The Blood Orchid (2004)Intense sequel to "Anaconda" follows a team of scientists on a daring expedition to Borneo in search of the fabled Blood Orchid. Hoping to locate the flower and unlock the secrets of eternal youth that it possesses, the group quickly encounters slippery terror in the form of deadly giant snakes. With seemingly nowhere to hide, can the researchers slither their way to safety? Johnny Messner, KaDee Strickland, Matthew Marsden star. 97 min. C/Rtg: PG-13 Anaconda 3: Offspring (2008)David Hasselhoff stars in this scaly sequel as Stephen Hammett, a grizzled mercenary hired by a billionaire to track and capture a dangerous serpent believed to be the key to finding a cure for a terminal illness. But the hunters quickly become the hunted as Hammett and his team find themselves in a desperate fight for survival. With Crystal Allen, Patrick Regis, and John Rhys-Davies. 91 min. C/Rtg: R Anacondas: Trail Of Blood (2009)John Rhys-Davies reprises his character from "Anaconda 3: Offspring" in this fourth series entry, portraying the villainous corporate baron Peter "J.D." Murdoch again aiming to capture the supersnake's priceless serum. Scientist Amanda Hayes (Crystal Allen) has rehabilitated herself, however, and looks to foil Murdoch's plot and protect other innocents from becoming the serpent's next tasty meal. Calin Stanciu, Linden Ashby co-star. 88 min. C/Rtg: R Widescreen; Soundtrack: English. Region Free