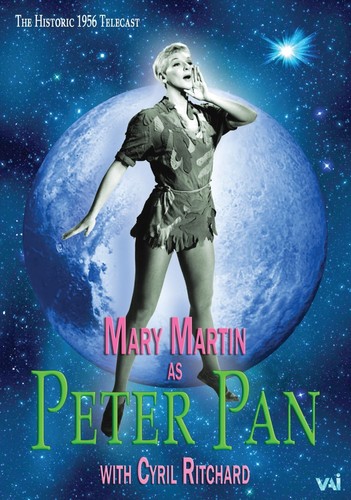 Available for the first time on home video the historic live 1956 telecast of Mary Martin as PETER PAN, generally considered the definitive performance of this beloved musical. Only nine days after the initial Broadway run had ended, the cast and crew (under the supervision of Director Jerome Robbins) assembled in the large Brooklyn studios of NBC to perform the show live for television. Describing the enormous success of that telecast, Cyril Ritchard (Captain Hook) noted "...it was not just a TV performance, it was a stage production brought to the cameras." A year later, in preparation for the second PETER PAN live telecast, essentially the same cast reunited for several performances at the Ambassador Theater in New York City for invited audiences of children. This gave the 1956 telecast the same fresh theatrical quality as the first. The New York Times hailed the second telecast as Thrilling!... The production had that electrifying excitement of theatre at its most finished and, above all, that contagious espirit that joins player and audience in a sublime escape from reality. The stellar cast also includes Kathy Nolan as Wendy, Sondra Lee as Tiger Lily, and Heller Halliday (Mary Martin s daughter) as Liza. The unforgettable songs including Never Never Land, I ve Gotta Crow, and I Won t Grow Up were written by Mark Moose Charlap and Carolyn Leigh, and Jule Styne and Betty Comden and Adolph Green. Also available as a special Blu-ray Collector's Edition