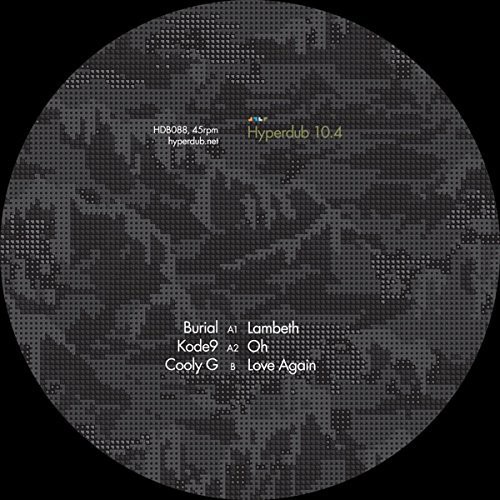 'Decadubs 5' is a vinyl-only double-pack companion to 'Hyperdub 10.4', the fourth and final CD in Hyper dubs series of collections throughout 2014 to mark the labels first decade in existence. Both 'Decadubs 5' and it's full-length parental set explore the club spaces opened up by house, garage and techno, as viewed through Hyperdub's singular filters. Side 1 leads out with 'Lamberth', a long awaited previously unreleased track by Burial, with an unusually triumphant and - compared to recent extended montages relatively direct 2 step feel. This is followed by the low slung tech-garage of Kode9's 'Oh', while on the flip the whole of Side 2 is given over to the lush deep house of Cooly G's 'Love Again'. Side 3 opens with the fathoms-deep bubbling bass and synth washes of DVA's extremely psychedelic 'Monophonic Nightmare', then Dorian Concept turns n a quirky remix of Martyn's classic 'Mega Drive Generation', which originally appeared on Hyperdub's fifth anniversary compilation in 2009. Side 4 reveals another classic from the vaults in the shape of Cooly G's skeletal house cut 'Him Da Biz' and the EP comes to a close with energy levels turned up on Funkystepz's 'Vice Versa', a track much in demand since it first appeared on Kode9's 'Rinse 22' mix compilation from 2013.
120 East Washington Street, Goshen, IN 46528 574-971-8282 Store Hours Monday-Thursday 10:30-5:00, Friday-Saturday 10:00-8:00.