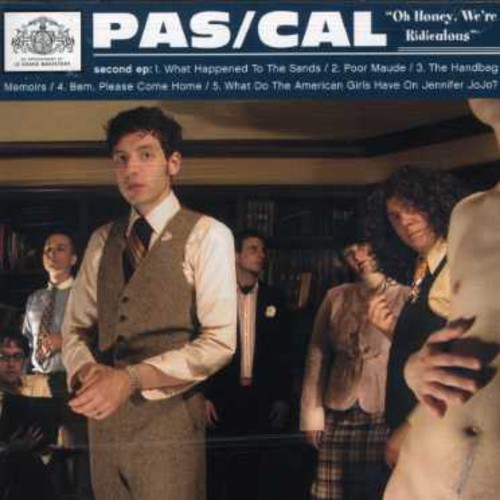 PAS/CAL just might be the most interesting pop band in America today. Imagine a band with Pulp's knack for intelligent grandiosity, Elliot Smith's fractured falsetto temperaments, and the warm harmonies of the Beach Boys." 'Oh Honey, We're Ridiculous', the second EP by the Detroit pop group Pas/Cal, is an effort that was built, quite literally, from the ground up. Prior to recording, Casimer Pascal, the group's vocalist, producer and just all-around mastermind, took it upon himself to convert his garage, with the help of his Pas/Cal crew, into the group's very own recording studio. Much work and care was expended into the layout and make-up of this new creation dubbed Recordings West: blood was shed, sweat was poured and tears were cried. In many ways this effort was an appropriate preface to the recording of 'Oh Honey, We're Ridiculous', for both would prove to be labor-intensive works that required the most careful attention to the tiniest of details: tiny details that would yield enormous results. The record begins with the latest entry into the Canon of Catchy Compositions, 'What Happened to the Sands', a lyrically pensive and musically rollicking number sure to win over the hearts of all romantics and minds of all intellectuals. References range from the music of the Smiths to the paintings of Wassily Kandinsky while the song bounces and charges amidst shimmering guitar solos, crunchy distortion and some of the wildest drum work heard since the passing of Keith Moon courtesy of Little Tommy Daniels. The NME would plainly say, 'It rocks'. We say, 'It rolls'. Either way you've never heard boys with such sensitivity get so raucous, yet remain so refined. 'Poor Maude' follows, opening with a chiming acoustic guitar leading into what the group refers to as its first 'POPERA'. It's the heartbreaking tale of the oldest woman in the world set over the most meticulous and still charming chamber pop the Left Banke wish they'd come up with. 'Poor Maude' is a song of many movements steered by heart-warming strings, carefully crafted piano, and Nathaniel Burgundy's trademark slithering bass lines, traversing such disparate territories as baroque pop, spacey rock and Rolling Stones-esque jams. Listen carefully to the intricate textures of the music and even more carefully to the moving story the lyrics tell. The scope is narrowed a bit for a breather on the next track, 'The Handbag Memoirs' (coincidentally the name of Pas/Cals debut EP released on Le Grand Magistery last year). One of the more 'pop' and 'catchy' numbers of the release, the song is also just as pensive and contemplative as the others. 'All the notes that you wrote without me in mind - it's alright', our narrator tells his lover over an engaging bossanova beat, as he explores and comes to terms with her accumulated past that she 'carries on [her] shoulder for far too long'. 'Bem, Please Come Home', the release's instrumental, would surely make an excellent song for any Wes Anderson film. Featuring the masterful and touching guitar work of Pas/Cal's lead guitarist, Gene Corduroy, it is also supported by enchanting chimes and synthesizers and crystalline vocals by the titular character, Bem. The record then closes with the show stopping 'What Do the American Girls Have on Jennifer Jo Jo?' Modeled after the archetypical Great American Song, it is epic in its sweep, complete with whip-snaps, whistle solo and the most beautiful and shocking guitar solos this band has produced thus far. The song alternately lulls with reverberated atmosphere and screams with crunch, crash and intense organ work by Richard Panic. The guitar sounds were laboriously handcrafted in the studio by Gene and Caz, utilizing vintage equipment, ingenuity and old-fashioned knob-twiddling. The result is an epic masterpiece that will have you alternately weeping and cheering.
120 East Washington Street, Goshen, IN 46528 574-971-8282 Store Hours Monday-Thursday 10:30-5:00, Friday-Saturday 10:00-8:00.