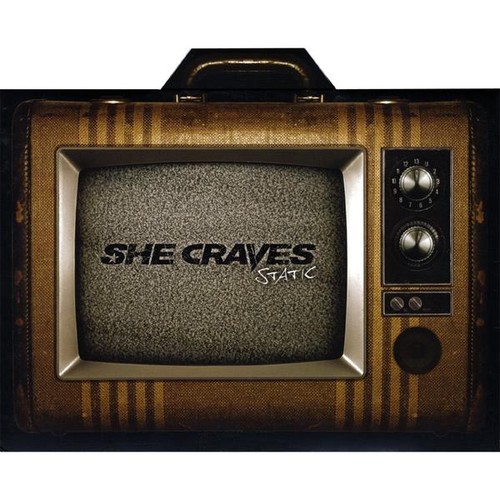 Static, the new CD from She Craves, is an interactive adventure brought to life by a collaboration between She Craves and Austin based design firm Fireside Creative. The disk contains 5 brand new songs that were recorded in Austin, Texas, at Jacketweather Studios with long time collaborator and producer, David Dreesen. However, She Craves wanted to give their fans more than just the music this time around. They wanted to show behind the scenes and give fans a glimpse into the recording process that was the creation of Static. The idea to make the interactive CD was born and so was the Suitcase Television, the launching pad for the interactive content. By clicking through the graphics, one realizes not only can they find videos, demo songs, pictures of the band, and lyrics, but they will unravel the story of the man who invented the Television Suitcase. It's mysterious and fun and there are many hidden gems to find. With slick, custom packaging as well, even the case itself becomes part of the experience. She Craves aimed to set themselves apart from other bands at their level, create a great rock record, and give their fans something to bite into. They succeed with their 3rd release, Static, which is now available to buy as the band hits the road to bring the music and the fun to the masses. She Craves is a four-piece rock outfit from Austin, Texas. With a fun, energetic live show and smartly crafted hooks, She Craves lures their audience in and keeps them bobbing their heads in time with the catchy, up-tempo, guitar driven, modern-alternative rock the foursome is known for. The band, comprised of members Christine Ely, Roger Wuthrich, Matt Cole, and Ben Mills, has released 3 albums in the 2 years they've been together, and they show no signs of slowing down their continuous tour schedule that takes them regionally through Texas, Louisiana, and Okalahoma. She Craves thrives on their live show and often supports larger touring acts such as The Donnas and Hurt when they come through the region. This is rock and roll as fresh and as exciting as it comes, and She Craves won't let you forget it.
120 East Washington Street, Goshen, IN 46528 574-971-8282 Store Hours Monday-Thursday 10:30-5:00, Friday-Saturday 10:00-8:00.