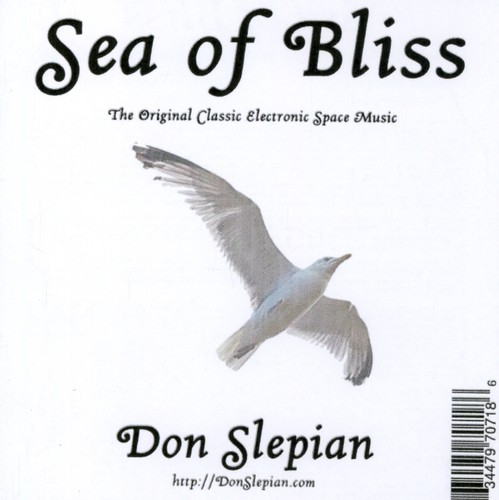 Computer music was born back in 1958 in Max Mathew's sound lab, at what was then the Bell Telephone Labs research center in Murray Hill, New Jersey. From 1979 through 1981, I was "Artist In Residence" at the Labs. Most of my time then was spent working with the Bell Labs Digital Synthesizer, also known as the Alles Machine (pronounced 'Alice'), named after it's designer Hal Alles. The Alles Machine was disassembled in 1981, with Sea of Bliss the only full length piece of music ever realized on it. Using that machine, the three pieces that make up Sea of Bliss were composed, performed and recorded February 3-4, 1980 and released on cassette. I revised these tracks in the year 2000 for the first CD release, adding a few touches of acoustic piano. Often featured on the popular syndicated radio show Music From The Hearts Of Space, Sea of Bliss became the influential archetype of an emerging new genre, Ambient Electronica. Sea of Bliss may change one's state of consciousness. People have often used it for meditation and massage. In hospitals, it has been used during labor and childbirth as a sonic analgesic. In the car it combats rush hour/traffic stress. I consider it a form of aural fragrance, or 'Sonic Perfume.' The more technically minded or historically curious may be interested in a more detailed description of the creation of Sea of Bliss. As this question has been posed numerous times over the years, for like-minded individuals the following is respectfully offered. With the help of engineer Greg Sims I ported my favorite sequential permutation algorithms that I had previously created on the analog sequencers EML 400/401 for the piece 'Glimmerings' (Electronic Music From The Rainbow Isle, 1976) to the Alles Machine. This enabled me to perform two levels of mathematical permutations on a list of up to 150 notes using real-time controls. Two finger-actuated sliders were read sequentially, each allowing me to skip from zero up to seven notes in the note list. For example, the instrument could be made to go through the note list, play one note, skip three notes, play one note, skip seven notes, and so on, wrapping around from the end of the list back to the beginning. Manipulating these two sliders with a well chosen note list yielded a number of interesting, non-obvious melodic fragments which were easily mutated from one to another. Besides great permutations, I had three octaves of transposition, instant retrograde, and a variety of rhythmic options (such as triplets, dotted rhythms, and half-speed) instantly available and performable on the beat. I performed with the sequencer while playing the long sustained bass tones, allowing me to transpose the sequential parts while modulating the underlaying harmony. A quality that makes Sea of Bliss more interesting than most pieces of it's type is the high arpeggiated figurations, like little fairy bells, that interlock in time and harmony. These clouds of melody notes (the output of sequential permutation algorithm) show the power of real-time control in the production of interesting and varied music from sequential and stochastic techniques.