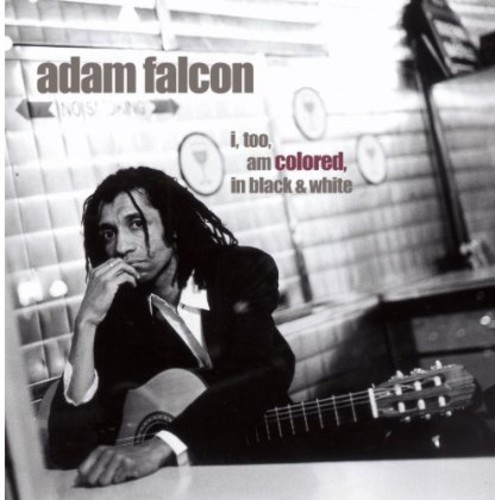 I Too Am Colored in Black & White
Artist: Adam Falcon
Format: CD
New: Not Available
Wish

Being born and raised in a diverse city such as New York, only gives good reason as to why the music of Adam Falcon is just as diverse. Adam, one of the most colorful and emotionally filled guitarist, singer-songwriters around, now steps from a supporting role to a leading one. Working as an experienced session and touring musician has granted Adam a wealth of opportunity. Whether it was being on tour with Phyllis Hyman, Will Downing, Jonathan Butler, Sophie B. Hawkins, or the great Roberta Flack or perhaps in the studio along side Digable Planets, George Benson, or Arif Mardin, Adam states, 'It was just like being in a musical goldmine.' One of Adam Falcon's brightest moments as a songwriter occurred when his mentor and idol, George Benson, chose to record a composition of his. Produced by the legendary Arif Mardin, the song 'In Search of a Dream' was included on the million selling record 'In Your Eyes.' Years later, having lightning strike twice, producer Tommy LiPuma used yet another composition from the pen of Adam Falcon. This time the song entitled 'True Blue' from the album 'That's Right.' Once again, the artist being, none other than George Benson. Adam Falcon's R&B, Jazz-tinged, Alternative Soul is a fresh new blend, which allows us to hear music in a whole new light. What Some Great Musicians Are Saying About Adam Falcon: 'Check out ADAM FALCON.I have been in tune to his playing and musical ideas for a long time; both as a guitar player and composer.I'm also hearing him for the first time as a vocalist, and I like it!!' GEORGE BENSON 'There are many flavors on this CD...and not one screams RIP OFF... If you enjoy the music of ARRESTED DEVELOPMENT,GEORGE BENSON,or the DAVE MATHEWS BAND,give ADAM FALCON a listen.' NONA HENDRYX 'ADAM, it is great to hear you...You sound wonderful...I love your CD. It is like a breath of fresh air, full of life and light, warm and soulful textures. You sound great on that gut string...I love the voicings that you used in your beautiful arrangement of what is one of my favorite songs of all time (Up From The Skies).' VERNON REID 'What a pleasure it is to hear this CD and to hear ADAM in a lead capacity. ADAM has been a very important part of my band and musical sound for many years. His command, sensitivity, and emotion on guitar is unmatched. This CD is a must have!' WILL DOWNING.
120 East Washington Street, Goshen, IN 46528 574-971-8282 Store Hours Monday-Thursday 10:30-5:00, Friday-Saturday 10:00-8:00.