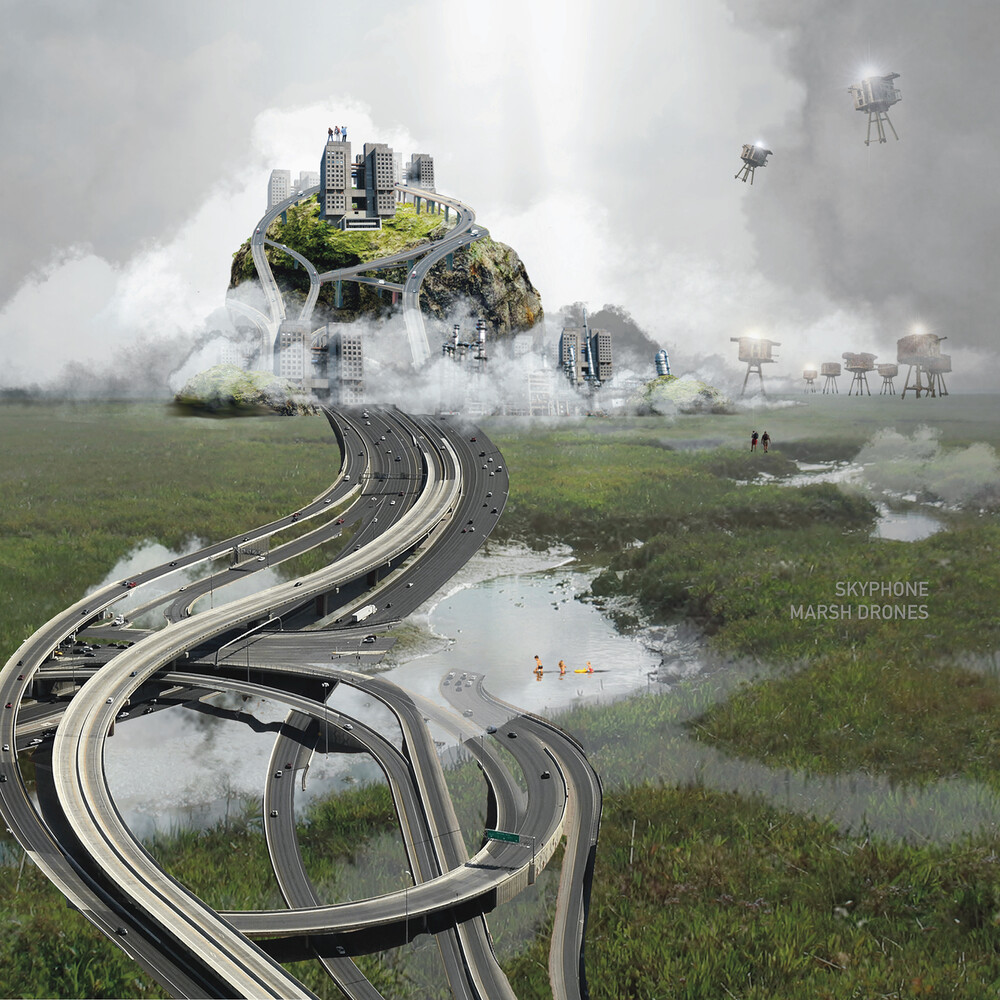 Lost Tribe Sound presents two albums from the Danish trio, Skyphone. 'Marsh Drones,' their first new album in over 5 years, will be released along side their previous album 'Hildur' (appearing on vinyl for the first time) on August 23rd, 2019. The marsh land areas of western Jutland in Denmark can be flat and non-distinct to the visitor who only takes a quick glance at it. But when you are born and raised in those parts, and when you travel away to live, work, raise families, play music, anything to escape the rainy flatlands, you think about that landscape differently. On Marsh Drones, the weirdness of this landscape is reimagined in a kind of giddy, absentminded way, as though they try to recall not only the broad topographical scheme of the land (cultivated, industrialized, farmed, soggy with seawater, a breach of the ditches that pours cold north sea water inland, the farms and waterways overflowing), but only the detailed, grainy realness of sediments and layers of soil, of the hazy and salty light (Saltlys) that wraps the landscape in a kind of palpable inertia.Many of the ideas on the 'Marsh Drones' emerged from field recordings from the area around the Tonder marshlands recorded by various members of the band. They provided a backdrop to the loops and long guitar session of guitar, bass, synthesizers, and samples that were slowly mangled and rearranged into counterpointing and fugue-like melodies, insistent on repetition while odd atmospheres of distant drones and noise works to modify and shift the composition into new shapes. The music is minimal, restrained, but rich in detail like the landscape it attempts to resonate with. There are remnants of folk music, melodies that are almost recognizable, but dub music and something distinctly digital intersects itself into the woodwork and authenticity.Bird murmurations cloud a setting sun, they settle in the reeds with a hush. Maybe, today, it's Murmalvejr, some sort of imaginary word for a kind of weather that doesn't really exist. The rhythms are sometimes based on minuscule clicks that embellish the track in something resembling a detailed microscope peek into watery silt and soil. Sometimes a drum machine appears, adorning track with an afterglow of past futures, organic machines that drag though the landscape, yellow industrial lights that flash smoothly across the wet soil. Drones traverse the sky, they sense the landscape in code, assembling irregular digital maps. If one imagined the landscape seen through the eyes of some yet unknown apparatus that scans the past for signs of the future.
120 East Washington Street, Goshen, IN 46528 574-971-8282 Store Hours Monday-Thursday 10:30-5:00, Friday-Saturday 10:00-8:00.