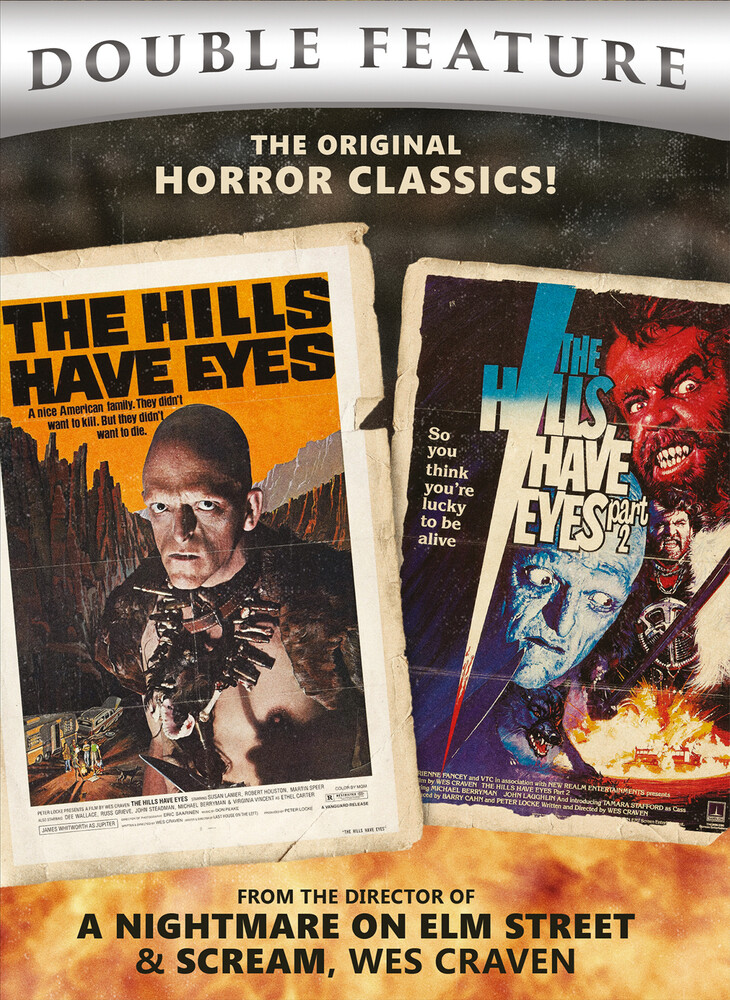 THE HILLS HAVE EYES: THE LUCKY ONES DIED FIRST... Horror master Wes Craven achieved critical and commercial success with the likes of Scream and A Nightmare on Elm Street - but for many genre fans, the director's seminal 1977 effort The Hills Have Eyes remains his masterpiece. Taking a detour whilst on route to Los Angeles, the Carter family run into trouble when their campervan breaks down in the middle of the desert. Stranded, the family find themselves at the mercy of a group of monstrous cannibals lurking in the surrounding hills. With their lives under threat, the Carters are forced to fight back by any means necessary. As grueling a viewing experience today as it was upon initial release, The Hills Have Eyes stands alongside the likes of The Texas Chain Saw Massacre and Night of the Living Dead as one of the defining moments in American horror cinema.THE HILLS HAVE EYES: PART 2: The hills are once again alive with the sound of screaming in Wes Craven's hugely entertaining follow-up to his own groundbreaking 1977 The Hills Have Eyes. A motocross team on their way to trial a new super-fuel head out across the desert lead by Rachel, who, unbeknownst to the rest of the group, is a survivor of the cannibal clan which menaced the Carter family several years before. Opting to take an ill-advised shortcut across the desert, the busload of youngsters drive straight into the path of the remnants of Rachel's demented cannibal kin - the menacing Pluto, and a hulking, blood-hungry brute by the name of The Reaper. Made by Wes Craven immediately prior to his smash-hit A Nightmare on Elm Street, The Hills Have Eyes Part II diverges from the grim tone of it's predecessor in favor of fun action-horror thrills and spills replete with mutants, motorbikes, and - oh yes - dog flashbacks
120 East Washington Street, Goshen, IN 46528 574-971-8282 Store Hours Monday-Thursday 10:30-5:00, Friday-Saturday 10:00-7:00. Items available on our website may not be in stock at our store. Please call us with any questions!