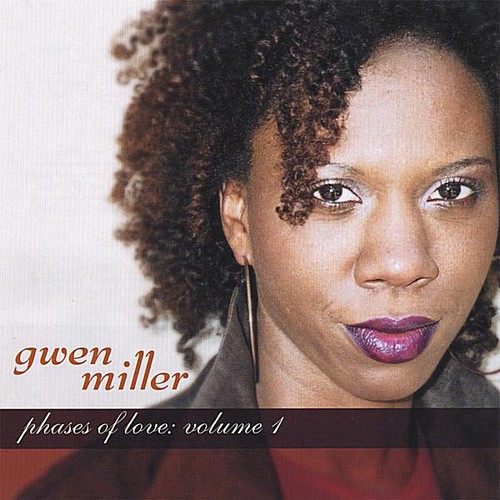 "Singing is like giving myself up to the song. It's like opening a door and allowing the song to exit out of my heart." These are the words of Gwen Miller, a fresh, new singer/songwriter who is about to make her mark in the soul/gospel music scene. Gwen Miller's eclectic, soulful singing style was fabricated in the rural areas of Poplar Grove, Arkansas. Gwen's explosive style was influenced by such artists as Isaac Hayes, Aretha Franklin, Gladys Knight, Donny Hathaway, and Roberta Flack. After teaching in Arkansas, she decided to fully pursue her dream to become a performer, so her talents could touch souls. Prompted by her faith in God, she moved to New York and began to launch her music career. Over the years that followed, Gwen diligently wrote and recorded songs. She also has performed at several venues around the city such as the Village Underground and the Sugar Bar . In order to understand Gwen, you must know a little about her family life. Love, laughter, music, and also heartache were the threads that connected Gwen's family quilt. A household of eight children that was linked together by a mother's love and a father's determination pieced together Gwen Miller's vibrant personality and persevering spirit. As an outlet, Gwen began to sing and write music. "Singing and writing songs became a form of escape, it became a connection, a serenity between me and God", says this dynamic singer. One thing Gwen believes about music is that the first chord, the first word, the performance, the entire song as a whole should pierce into the heart. In summary, what comes from the heart touches the heart. This is how Gwen approaches singing. She has grabbed the attention of her audience by embracing any song that she performs with emotionally driven, raw soul. Gwen Miller is truly an amazing woman who is filled with passion for life, people, and music. Her desire is to share this passion with others across the world. So, with her dream and purpose in her heart, Gwen Miller is determined to persevere until she accomplishes and surpasses the dream that God has placed in the depths of her soul.