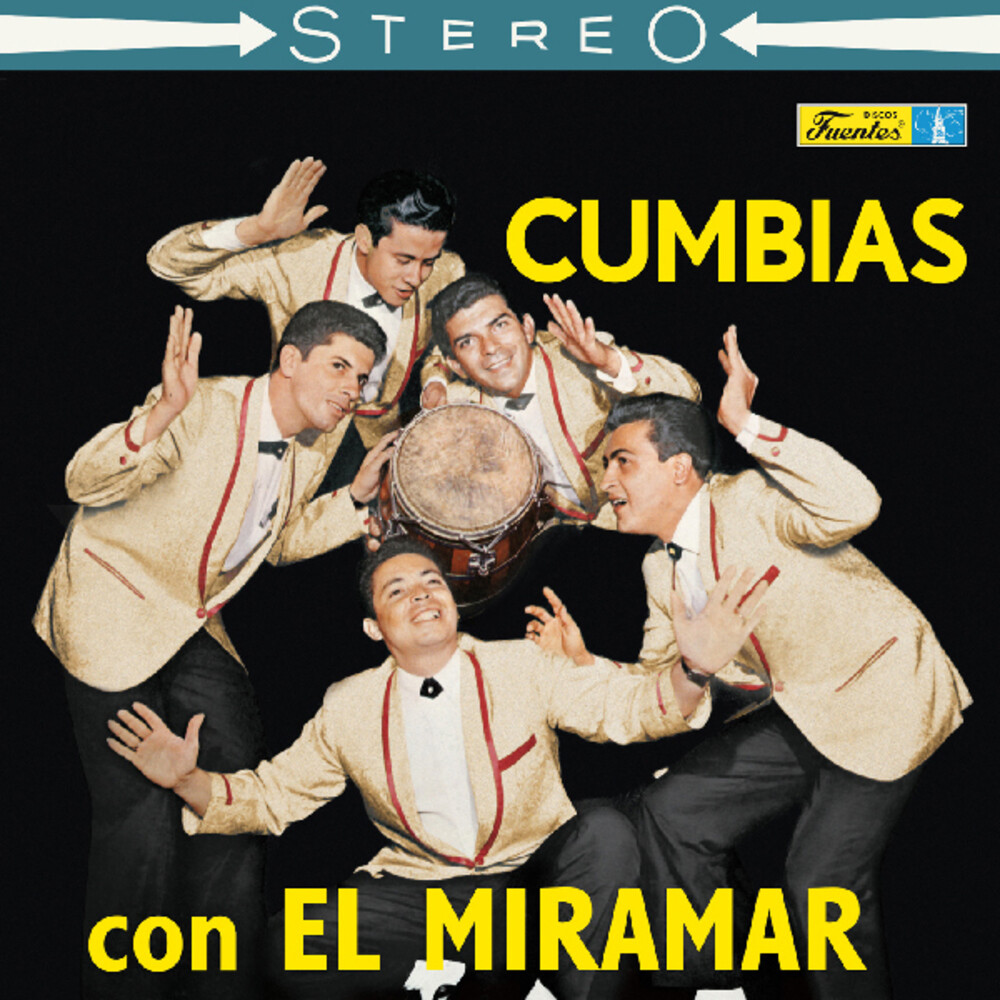 "Cumbias con el Miramar is a very hard-to-find, sought-after album released by Discos Fuentes in 1965. Full of excellent cumbias and gaitas for dancing, the record actually is a lot more diverse than the title leads one to believe, as there are lots of other hot rhythms and arrangements on it, taken from Cuban genres like guajira, guaracha, guaguancĂł, charanga and son montuno... Throughout the album the very simple, spare elemental sound is consistent. The band members at this time included DarĂ­o Restrepo (aka 'Guayabita') on piano, RubĂ©n DarĂ­o Restrepo ('El Mago') on guitar, HĂ©ctor Quintero on saxophone, clarinet, flute, xylophone and vocals, Hugo Gil ('Chamizo') behind the drum set as well as on tumbadora (conga) and vocals, with HernĂˇn Builes being the band's director and bassist (and occasional accordionist)... Soon afterCumbias con el Miramar was released, Builes reformatted the line-up and instrumentation, updating the sound to reflect recent developments in Caracas, San Juan and New York, adding vibraphone in the fashion of The Joe Cuba Sextet, renaming the group Sexteto Miramar and debuting the groundbreaking album ÂˇSalsa! Mi Hermana... Interestingly, Cumbias con el Miramar contains superior versions of 'Cumbia del sol' - arguably one of the band's most famous and internationally influential songs - and 'Lelogua', both of which had also been recorded earlier for their Zeida LP. In addition, several other tunes from the record - 'Cumbia loca', 'Cumbia de estrellas', and 'Noche y cumbia' - have been popular among DJs, 'sonideros' and dancers for 50 years. But while these cumbias form the backbone of the album and situate it firmly in the folklore of the band's native Colombia, the LP's Cuban-styled songs like 'Mensaje guajiro' and 'Lelogua' point to the other obsession of Colombian audiences, namely that of Afro-Antillean music (that would be marketed as 'salsa' in the following decade). The album offers us a fascinating snapshot of a pivotal period in Colombian music when outside influences (such as salsa from New York) and the wildly popular phenomenon of so-called 'raspa' or 'chucu-chucu' cumbia groups from the interior (described as 'paisa', i.e. not from the Afro-Colombian coastal regions where cumbia began) were initiating a transition from the old sound (and generation) to the new..." Pablo Iglesias, aka DJ Bongohead First ever reissue. Part of Vampisoul's reissue series of classic Fuentes LPs. Presented in facsimile artwork and pressed on 180 gram vinyl.
120 East Washington Street, Goshen, IN 46528 574-971-8282 Store Hours Monday-Thursday 10:30-5:00, Friday-Saturday 10:00-8:00.