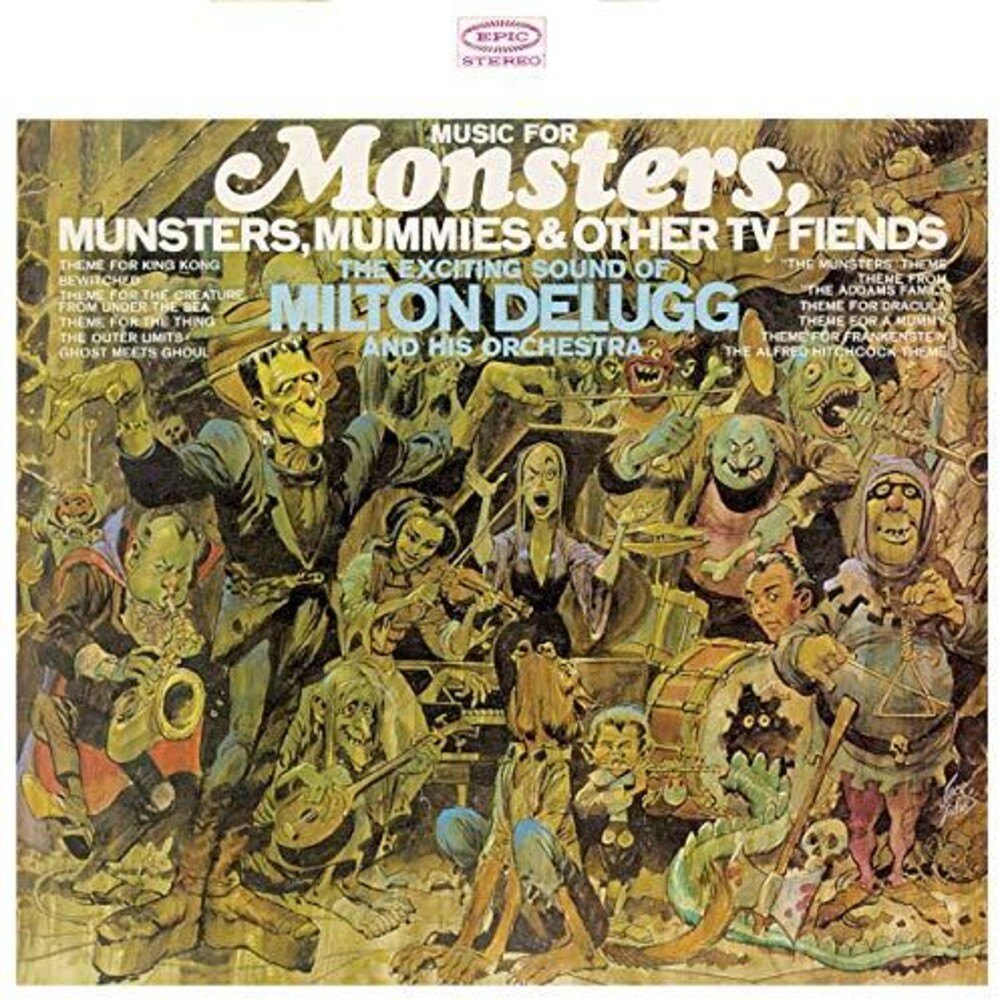 You see it over and over in the annals of record collecting. Some marketing whiz in the front office has an idea to cash in on a fad by releasing 'product' as quickly as possible. But the artist(s) hired for the project decide not to phone it in, and take things in a direction all their own. The result: a weirdly wonderful collision of the commercial and creative prized by crate diggers across the globe. Such an album is Milton Delugg & His Orchestra's Music for Monsters, Munsters, Mummies & Other TV Fiends. Recorded in 1964, at a time when commercial TV saw no less than three comedy series (The Munsters, The Addams Family, and Bewitched) featuring supernatural/horror themes make their network premieres, this album' which, last time we looked, commands some very tidy sums online' made sure to touch all it's TV bases by including the themes to all three shows mentioned above, plus The Alfred Hitchcock Hour and The Outer Limits. But, in the hands of one Milton Delugg and His Orchestra, this album takes an unexpected turn from the disposable to the delightful. That's because Delugg was literally made for this job; he composed 'Hooray for Santa Claus,' the catchy theme song to the Grade Z film Santa Claus Conquers the Martians, the same year this album was made before becoming Musical Director for Chuck Barris's various game shows, most notably The Gong Show leading his 'Band with a Thug.' And, to top it all off, he produced Buddy Holly's 1958 single 'Rave On!' You'll hear all of those influences here and more, not just on Delugg's versions of TV themes'The Munsters Theme' sports a great, Duane Eddy-style guitar line'but on the seven originals he penned for the project. Thus, 'Theme for Frankenstein' sounds like it inspired Neal Hefti's 'Batman Theme' two years later, 'Ghost Meets Ghoul' is an affectionate knock-off of Henry Mancini's 'Pink Panther Theme,' and 'Theme for a Mummy' brings a little samba beat to the 'inter-tainment.' Sporting a fantastic cover illustration by Mad Magazine's Jack Davis, and mastered at 45 r.p.m. for maximum sonic thrills and chills, Music for Monsters, Munsters, Mummies & Other TV Fiends is a great listen not just at Halloween but any time of year' but since it is Halloween, we pressed up a limited edition of 900 copies in Ghoulish Green vinyl!
120 East Washington Street, Goshen, IN 46528 574-971-8282 Store Hours Monday-Thursday 10:00-8:00, Friday-Saturday 10:00-9:00.