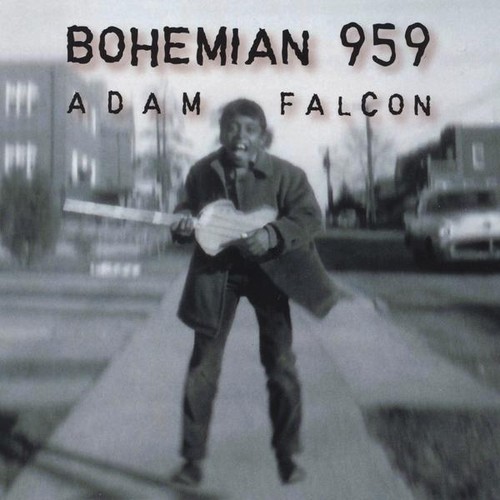 LaRonda Davis of the Black Rock Coalition best describes Adam Falcon when saying, "...his guitar and voice lullabying nerves and rousing that something in each of us that responds to good music...skill and passion ... for that, he deserves his props." Now on his newest Ghetto Drum Records release, 'Bohemian 959', Adam Falcon demonstrates just this. Falcon, an Abe Olman Songwriter Scholorship award winner, with the help of once again producer Trevor Gale, has assembled a fine collection of great songs. Falcon's original compositions range from pop to rock-infused funk all suggesting a hint of 70's soul. Also included here are the re-workings of soul classiscs "I Wanna Be Where You Are," first made popular by The Jackson Five and "Sunshine (Woke Me Up This Morning)" by Labelle. The line up of musicians and singers reads like a who's who of music veterans; Reggie Washington, Freddy Cash, Gene Lake, Nasheet Waits, Tony Lewis, Rocky Bryant, Joe Scott and Bashiri Johnson just to name a few. Helping out in the vocal department are names like Martha Redbone, who's voice is heard at the end of the Sly Stone-ish track "Somebody" along with Keith Fluitt. The sultry voice of Urban Folk and Jazz artist KJ Denhert is heard on the song "Goin' Back For More" with Adam Falcon, together for the first time since their 2004 IMA nominated CD 'The Songwriters Notebook.' A main highlight on 'Bohemian 959' is the duet featuring special guest vocalist Nona Hendryx on the aforementioned "Sunshine (Woke Me Up This Morning)." As a member of Labelle this Hendryx composition first appeared on their 1973 album 'Presure Cookin'. Those fortunate enough who caught Labelle's 2009 reunion tour knows the electricty of Ms. Hendryx. There is also fellow Ghetto Drum artist Picasso Brown adding his smooth vocals to the track "SoulSatisfied." On this same track is a phenomenal up and coming sixteen year old rapper, whom you will soon discover goes under the moniker "Nero." Returning background vocalists, Marc Nelson (Boyz ll Men) and Indira Khan (daughter of the famed singer Chaka Khan) are on the hotter and newely re-mixed song "Like A Soldier", first heard on Falcon's 2006 limited edition EP 'Piece Of Mine'. "The Waves" and "October Falls", taken from that same EP, also find their way onto 'Bohemian 959'. However, this time around on "The Waves" Falcon makes good use of a full power driven band, in contrast to his eariler release with just guitar and vocal. In addition the extended, newer version of "October Falls" spotlights bassest Reggie Washington, delievering a fine solo amidst the backdrop of a middle eastern melody performed by a string quartet. Where 'Piece of Mine' was a funkier step towards a new soulful direction, 'Bohemian 959' continues further ahead in full stride and for this Adam Falcon "...deserves his props."
120 East Washington Street, Goshen, IN 46528 574-971-8282 Store Hours Monday-Thursday 10:30-5:00, Friday-Saturday 10:00-8:00.