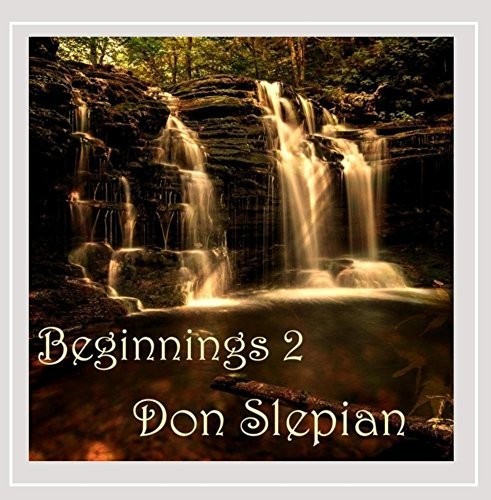 Beginnings Two, By Don Slepian Written by Steve Sheppard, One World Music, UK We move from Slepian's first album Beginnings One to the second quite naturally called Beginnings Two. I must say I have not heard such a beautiful start for years on the track Chasing Earths Sunrise. This is a moving composition that can gift you the visualisation of the sunrise on the horizon. Strange this, as I was watching the sunset the other day for a moment wondered if I flew towards it, would I keep hold of the daylight, this track does something similar in a musical vein. The composition itself is filled with relevant keyboards that create not only a dreamy landscape, but create a literal musical vista, reminding me greatly of the world of Darshan Ambient. Slepian has created the ultimate ambient arrangement that once again is packed with clever classical references and new age nuances. The longest composition off the release is called Phoenix and Pegasus and at over eighteen minutes long I would advise you to grab a drink, stick your headphones on, close your eyes and go on this amazing sonic journey with the artist. The track itself has a steady tempo for the opening segment and one could visualise flying through the galaxy towards these two monolithic creatures of mythology. There is then an absolutely gorgeous piano moment that transforms the piece at just before five minutes, this dear constant listener is defiantly something to keep an ear out for. The tempo then increases to almost a crescendo then pulls back like a falling star to earth; at this point Slepian's piano is sublime, the masterful performance on this epic composition is something to sit back and be in awe of, and it's imperious and magisterial style is something to just be amazed at. Once more the artist pulls in some classical moments with strings and keyboards that tug at the heart of the track and pluck their way in a backdrop of a harmonious star filled paradise. Next dear constant reader and listener we have a total change in direction with the piece called Secret Tryst. Starting with a mood filled room with the harpsichord playing in the back ground, soon a guitar adds it's weight to the dance and then when the strings come in it is almost like we have due ling segment of instrumentation. The careful guitar could lead us to a darkened alley way, where the meeting of two star crossed lovers is about to be held, the gentle piano with the symphonic backdrop gives us a level of tenderness as the two embrace. One can really see the progression Slepian has made from his first album. Beginnings Two is more cohesive in it's structure, while still retaining the original freshness. Secret Tryst I found a deeply moving track, there is a real element of love in this creation and one can feel that within the very gentleness of the composition. Sky in a Box is where we're off to next dear constant reader; a stunning opening of beauty mixed with some utterly sensual piano from the artist gives us another classic track. The synths and keyboards in this composition form a really sparkly filled oasis of sound, this whole album, this very track and both releases would be an ideal tool for storytelling. The tempo changes as the keyboards and sounds take us over the half way marker of this arrangement and still the imagery of laying on your back on a summer's day remains in my mind. One thing among many that I admire about Slepian's style is that he can pull a musical rabbit out of the magician's hat at any point in any composition and we can see this here on the end of the piece with an almost Debussy like finish. So we come once more to the end of the road of another album and the last track off the release Beginnings Two by Don Slepian. At well over fifteen minutes long we have a track here that is the perfect end to a proud and almost regal album at some points. Dance Solitaire is a track that has once more a segment of keyboards that will drive you to happiness and back with it's style. One can feel the love for the music that Don Slepian has, yes he is unique, but he has mixed the genres of Classical, New Age, Ambient Music and Electronica with ease and great skill, this track is a testament to that. Slepian's creations are heavily laced with narrative, but the opportunity to create that narrative is purely down to the listener. The string section within this piece is carefully woven and takes us through the middle section of the arrangement enabling us to join the dance. As we move into the last part we have a moment of ambient perfection and this track will indeed feature in my next ambient music show, it's pace and musical prowess is quite breath taking and the piano as usual holds the course steady. Beginnings Two has moved Don Slepian into grandmaster territory. Long have I yearned for another musician to inspire my imagination in such away as this. Take Synth and Electronic masters Isao Tomita and Kevin Kendle, mix them with Debussy and Messiaen and you are near to understanding the works of Don Slepian. I do not just recommend this album and the previous one (Beginnings One), I absolutely endorse both works as arrangements of cross-genre brilliance, so go on, get them in your collection and let Don Slepian take you to a musical plane that you never even knew existed.
120 East Washington Street, Goshen, IN 46528 574-971-8282 Store Hours Monday-Thursday 10:00-8:00, Friday-Saturday 10:00-9:00.