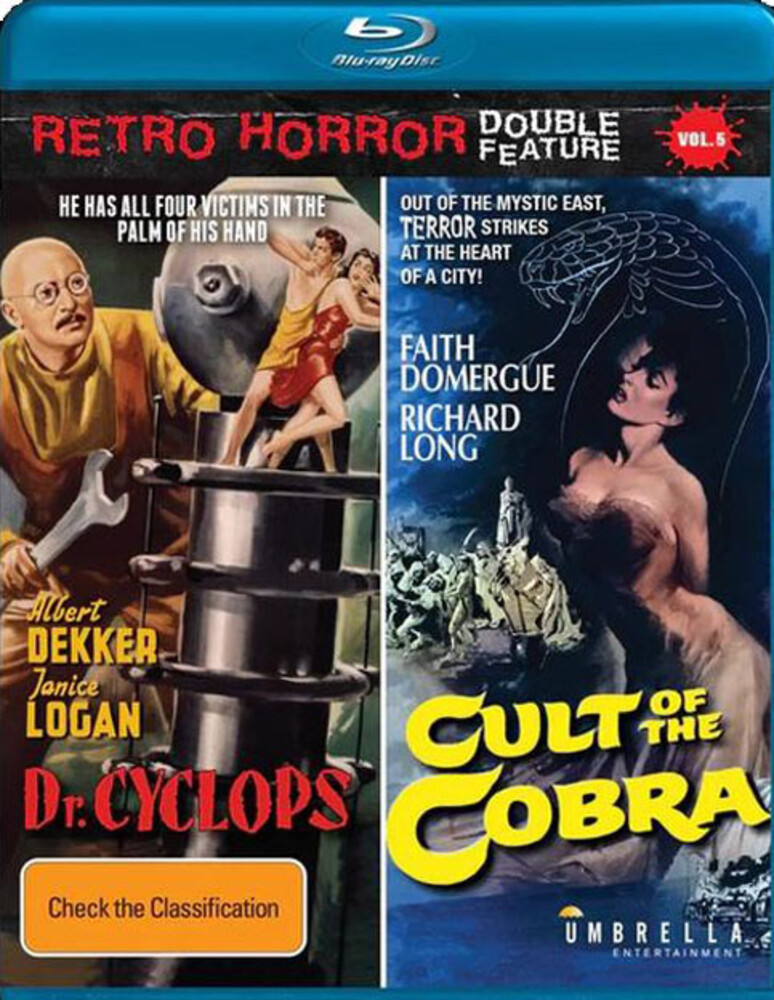 DR. CYCLOPS Set in the Peruvian jungle, this 1940 landmark science-fiction adventure, directed by pioneering filmmaker Ernest Schoedsack, follows four explorers as they search for legendary physicist Dr. Cyclops. When they discover their missing colleague, they find his brilliant mind has been warped by radiation and decide to return him to civilization for psychiatric help. But the half-blind, half-mad scientist will have none of that, and uses an experimental body-altering device to reduce his former friends to one-fifth their normal size. Now, harmless items and small creatures suddenly become giant-sized instruments of death! The impressive use of special effects, which garnered an Oscar nomination, helped make this Technicolor sci-fi classic one of the most imaginative and memorable fantasy films of all time. CULT OF THE COBRA While on their last tour of duty in Asia, six American GIs meet a snake charmer in the narrow, incense-filled streets. Thrilled by legends of humans transforming themselves into serpents, the men buy their way into a secret gathering of snake worshippers. But they are discovered, and for defiling the sacred ceremony, the Lamian high priest vows revenge, cursing them with death. Shortly before they are to be discharged, Nick (James Dobson) is killed by a hooded cobra. Back in New York, the five remaining friends return to civilian life. Roomates Tom (Marshall Thompson) and Paul (Richard Long) are both in love with Julia (Kathleen Hughes), and when she chooses Paul, Tom is devastated until he meets exotic Lisa Moya (Faith Domergue), who moves in across the hall. But Lisa's mysterious arrival coincides with some very strange goings-on, as one by one, the former GIs meet with violent, seemingly accidental deaths accompanied by snake-inflicted wounds. Is the beautiful Lisa actually the agent of the high priest's curse? It's up to Paul and Tom to discover the truth before it's too late.